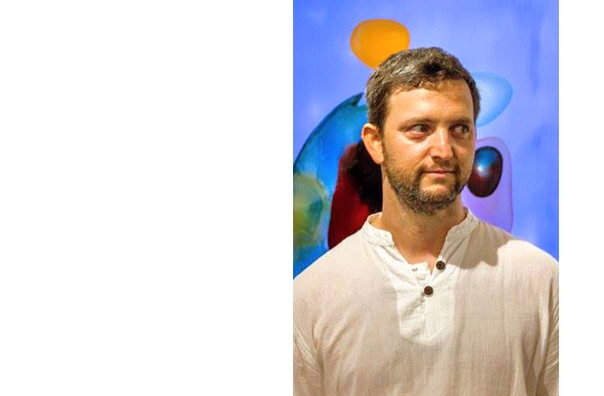 I received my diploma in 2001 from the Painting Faculty of the Hungarian University of Fine Arts. “I am exploring new worlds in the field of painting. Although I am working with non-objectivity, this does not mean that I am not interested in reality. I am searching the hidden side of nature and reality for the flow of densely woven waves within the elements of earth, fire, water and air. At first sight, my paintings could be viewed as single cells, organisms, or biological building blocks – a microscopic world locked in a Petri dish. My intention is to show the intensity of close, pulsating powers. Based on my visual experience, I create new worlds through my own visual system. I am interested in observing changes, while wandering through biomorphic and space imagination. As I paint, I create a balance between the planned and the improvised. The forms in the painting open a world to the imagination of the viewer. There is an airy opacity to the form, a moment of suspense and glowing colours that the gaze can sink into. After much experimentation, I hit upon the lacquer technique, which I feel provides the best means of visualising the effect I am seeking.”
CV pdf

The concept of entropy is primarily known from thermodynamics, but other sciences make use of it as well, as it represents a system’s disorder. If the natural world that surrounds us isn’t limited, it evolves towards the greatest attainable randomness, which means that the entropy increases. The atoms of a solid material are bound, which decreases their entropy, and if these materials are further systematized, it decreases even more. Attaining order costs energy. The extent of energy is constant in the Universe, the only changing factor is where and in what it concentrates. The ad hoc focus of the energy doesn’t alter the great whole, from the perspective of infinite time it is constant and balanced, everything relates to everything else.

I use this term of natural science in the philosophical sense, and it permeates my artistic work as well.

There is no destination, since it’s impossible to reach one, because the nature of the world is to evolve towards entropy. We are constantly on the move, and taking a moment of the journey, we can only record a single moment of the great system of balance. This is what I’m trying to visualize with the tools of art.

One of the stronger tools of my creative work is varnish. As a material its entropy is lower, since it’s liquid, and therefore it’s striving towards greater randomness. Perhaps because of the repetitions in nature we are instinctively trying to create order in our environment and spaces. Maintaining this condition costs energy, but the maintaining itself is a static status. It’s impossible to keep it, because everything strives toward high entropy, and sooner or later a change will occur on the way to the newer state. The demarcation of the environment is a temporary limitation, the momentary focus point system of the energy state in space if you will, in which one moment of the journey is interpretable. I believe that in my compositions the geometrical elements of higher entropy, combined with the behaviour of the varnish are striving to visualize this philosophical approach.

In my previous "light sphere” period I concentrated on one half of the idea, I was interested in the material nodes of the varnish of higher variability, and in my newer works I added the interpretation, the space itself to this. I started to divide the previous organic forms that were created mainly through accidental and controlled motion, melting and precipitating in 2015 with geometrical, more or less regular shapes. Since last year, the amount of organic and geometrical shapes have been balanced out in my paintings.

Plasticity, that is, the splotches that give the illusion of spatiality are transformed into bubbles in the viewer’s mind, in part as a result of the interaction of materials (pigments, varnishes, alcohol), and in part as the consequence of my artistic vision. Meanwhile the colourful plane figures on the surface of the painting, in accordance with our learned visual schemes create the illusion of a different spatiality. These two illusions, sometimes reinforcing, sometimes extinguishing, contradicting each other create the image of the landscape, the space, the paradox space, even the slice of the visible world in the viewer’s mind. Sometimes I use contours, but the highlight doesn’t make them more tangible, and as a result the shapes vibrate dynamically, as if transforming through motion in the light. The detail of the paintings never reach the sterility of the ruler-perfect edges of the harde-edge painting, and I like to play with the variety of visions created by different textures, the interaction of matte and glossy surfaces.

This apparent inaccuracy is compensated with the deliberate form and colour compositions, and the consistency of the compositions that can be derived from one another. The entities thus created are not placed into the larger whole, they are usually surrounded by an ethereal background without real space or spectrum, thus abstracted from the factual. Besides the three classical physical conditions, such as gaseous, liquid and solid there is a fourth state as well, the plasma state. The plasma, as the component of the stars is the most common material in the Universe. Its internal structure is best described as a magnetic force field where the particles interact with one another in free motion.

To quote Lorand Gaspar, the French poet of Hungarian descent, “Formations which are moving on a flaring fire, and where time and fear found each other to rest in the peace of a palm” – I believe that my shapes are the frozen images of momentary balance in the flashing light at the meeting of time and movement.

Aside from the previously mentioned aspects I also consider time. It is the course of time that makes the moments of the journey coherent, and I have artworks that approach from this aspect. Time provides an inspiring conceptual framework, which, considering its characteristic features can also be modelled as such a field. With kinetic objects and animations resulting from one another, I can create several compositions within one artwork.

This notion is typical of all my works, and I continue this thought throughout my work. I am interested in examining light, energy, space, time, balance and connections, and I’m deepening this from the side of entropy, by presenting it through the creation of concrete artworks just like my previous thoughts – by building them on one another.

Typically I have been creating artworks of various media throughout my career, and now I am also applying several perspectives in connection with each other. The starting point for every proposal is the panel painting. Afterwards I continue the exposition with various tools, cyclically returning to the realization of the painting. In this continuous, high-performance creation of artworks there is a dialogue between the works made with different techniques, which always advances it a little bit forward.

Currently in a technical sense I also work with metal, my thoughts and shapes also materialize as sculptures, objects or reliefs as “spatial paintings”.